How many cows would you put on this field? 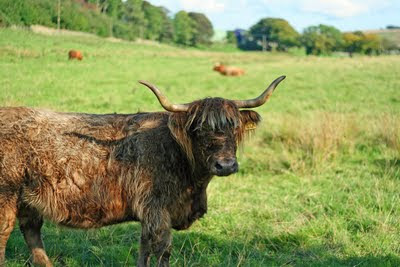 Garrett Hardin was an ecologist responsible for bringing "The Tragedy of The Commons" to the public eye in his 1968 paper of the same name. In it he describes how as population increases, the notion of a commons as a source of food or as a place for waste disposal must be abandoned.

One example given is herdsmen who keep adding livestock to a finite common pasture to the ultimate detriment of all of the herdsmen.

The herdsmen's problem, as well as runaway population growth and climate change (problems including the private exploitation of a common resource) are problems with no technical solution. To win, you have to change the game.

Enter Elinor Ostrom, an American political scientist. She recently won half of the 2009 Nobel Prize in Economic Sciences "for her analysis of economic governance, especially the commons".

She admits in her 1969 paper "Collective Action and the Tragedy of the Commons" that there are no cost-free solutions to problems, although we can achieve social arrangements "that will cost less than the benefits to be derived from such arrangements". The payoffs to working together are bigger than the costs of doing so.

Her work explores how local communities often manage scarce resources better than outside authorities. "Bureaucrats sometimes do not have the correct information, while citizens and users of resources do" she said.

How do you get people involved when it's easier to stay home and trust the people in charge to make the right decision? This is known in economics as a collective action problem. Solving it typically needs most of the people involved to work out a solution. The more people who opt out of the process, the more likely the bureaucrats are to step in with a solution that doesn't quite work.

For example, Ostrom's co-workers organized their kitchen cleanup by insisting that people clean their own dishes, but they also identified someone to do a final cleanup of the kitchen every day. That person got a spatula in their mailbox that morning and passed it on to the next person the following day. (From her NPR Planet Money interview). They manage it themselves, and it works. An outside bureaucracy couldn't easily implement something this simple and effective.

The take-away message here is that citizens need to pay attention to the issues and participate in finding solutions themselves. They are closest to the information and when they work together they can figure out the social organization that works for them and solves their problem.