EROEI: Bang for your energy buck 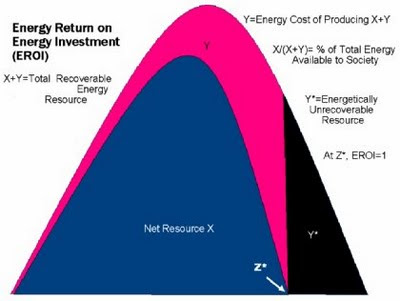 When investing money, people look for a good return on investment. Armies scour the markets trying to figure out where they should put their money so that they'll get the highest return on their investment. You can do the same thing for energy.

Energy return on energy invested (EROEI) measures the bang for your energy buck. This number will play a major part in determining our energy future because we gravitate to the technologies with the biggest energy payoffs.

Back in the 1930s oil was close to the surface, easy to extract. The EROEI back then was about 100:1. They got 100 barrels of oil for each barrel's worth of energy they put into extracting it.

Of course they extracted the easiest oil first, and so as time went on, they needed to invest more and more energy into extracting the oil. Middle Eastern oil these days gives back at about 30:1. North American oil is at about 10 or 15:1 and declining.

Tar Sands oil runs at about 1.5:1. For three barrels of oil coming out of the tar sands, it uses two barrels worth of energy (including lots of natural gas). Fully two thirds of the energy obtained from the Tar Sands is being used to operate itself. When you think about how much energy is there, divide that amount by at least 3, because of the energy it would take to recover that bitumen.

When the EROEI for the Tar Sands goes below 1:1 it won't be sensible to keep going, because then it will take more energy to extract the bitumen than you get from it. That would be like paying somebody a dollar to give you ninety cents. You can't stay in business doing that for very long.

Ethanol is already below 1:1 and only happens because of government subsidies, largely to corn producers.

For comparison, solar's ERoEI is about 5:1 and wind is about 4-10:1. With technology, those numbers are improving, while the fossil fuel numbers keep going down. Energy conservation has an even higher payoff. The cheapest energy source is the one you don't need to use.

When you're looking for a source of energy there are lots of factors to think about, but Energy Return on Energy Invested is one worth paying attention to.