1. The shape of the city: North American cities were built around the automobile. People here are spread out, and public transit needs density to be viable. If you hate transit, your city isn't dense enough. Remember, you don't need transportation, you need access. 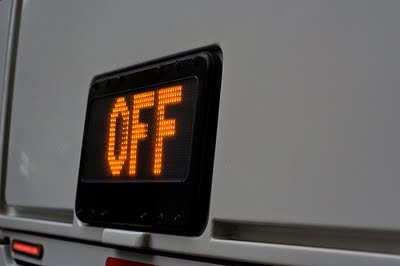 2. Free Roads, and Free Parking: The government built roads everywhere that you can use for free. In most places you can park for free too. Cities have rules requiring parking spaces when you build a building. This keeps the parking supply high, and parking prices low. Since you're only paying for the driving, and not directly for the roads, you don't feel the full cost of the auto-dependant lifestyle.

3. Traffic: If buses had their own lanes they could beat the traffic and have an advantage over single passenger automobiles. If they have to fight the traffic, they get stuck in the same jams that cars do.

4. Cheap energy: Even at $200/barrel, energy doesn't cost nearly what it's worth. If you paid someone minimum wage to make a barrel of oil's worth of energy for you, it would take them 8.6 years, and you'd owe them $138,000. Hydrocarbons are a bargain. We shouldn't waste them.

5. Learning Curve: If you don't know where the bus goes, or how to let the driver know you want to get off, you simply won't take the bus. You could just drive. Transit systems are complicated. Cars seem much simpler.

6. Missing the bus: Your car leaves when you do. Transit here isn't frequent enough. In Japan, peak times have trains every 2.5 minutes. There's always a train coming.

7. Paying for it: You have to pay every time you take the bus. With a car you don't have to pay to use it. Just for insurance, car payments, parking, gas, repairs and maintenance. None of those payments, however, are made at the moment you decide to drive, so it feels like it's free, but it's not.

What other reasons can you think of? How can we adapt our cities to improve access to the things we want?

Don't give away the ending