We have become a culture of entitled consumers, lubricated by hydrocarbons and easy credit, and pacified by two generations of roughly exponential growth into thinking this is how things should be.

We couldn't be more wrong. The age we're living in is the least typical of any in history. We're blowing through our planetary endowment of hydrocarbons and changing society and the face of the earth faster than ever before. That's just how we roll.

Relax. It's not your fault. The culture is built that way, and it places powerful expectations on you. Cultural norms restrict our imaginations and our possibilities in ways that we can't comprehend. But this is the same culture that is enticing us off a cliff with shiny things we don't really need. 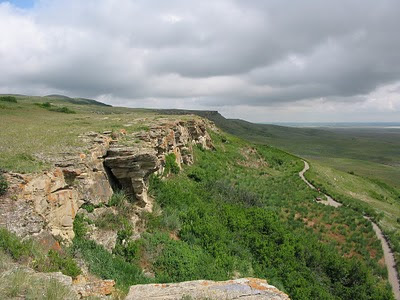 There are some culturally sacred cows here that need to be scrutinized. Maybe scrutinized is charitable. With apologies to all that we've grown up believing, here goes:

Population: By 2150, world human population is expected to be back down around 2 Billion. That's more in line with global carrying capacity. We can ignore the problem and crash hard, or we can find a way there that minimizes the strife. There may not be any happy solutions here.

Interest on money: Also known as usury. If people are allowed to charge interest on debt, they end up owning everything. It's impossible for everyone to pay it all back. Google "Money as Debt" for videos.

Exponential growth: Anyone who thinks the economy can grow exponentially forever on a finite planet is either an idiot or an economist.

Democracy sucks: At least the way we do it in Alberta. The PC Government got 87% of the seats with the support of only 23% of the eligible voters. That doesn't seem very representative. Other systems are better.

Consumerism: We've quit being Citizens with rights and responsibilities. Why? Corporations encourage consumerism. It's profitable. It turns us into docile revenue streams.

To fix these problems, we need to revise and rebuild the social infrastructure. The major problems we face will be solved not by things, not by people acting alone, but by people coming together to build a world that works.

How to fix Alberta Politics

EROEI: Bang for your energy buck