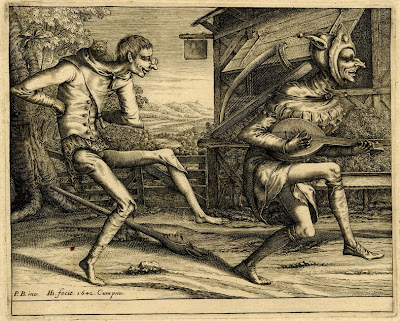 Two Fools of Carnival
Two fools dance toward the right while playing and grinning; behind them an inn.
Engraving made by Hendrik Hondius I After Pieter Bruegel the Elder,Dutch, 1642.

Minister 1: Future voters are in danger of discovering that their planet is screwed if we don't reduce atmospheric levels of CO2 below 350 p.p.m. immediately.

Minister 2: If they figure it out, they will surely insist that we do something to protect their planet.

Minister 1: (Standing) That would mean not taking the hydrocarbons from the ground and belching them into the sky. (Pounds fist on table) We can't have that!

Minister 2: (Mischeviously) If we want to keep enjoying the easy money the energy companies bring us we can't let the kids figure it out. We need to nip these kids in the bud with an old fashioned propaganda campaign.

It's right there in section 4.6 of the Alberta Provincial Energy Strategy. The government is going to "work within Alberta's education system to facilitate a flow of age-suitable information about the energy industry, it's importance, and its future".

Like Stelmach's leadership woes, they think it's a communication problem. Those kooky kids just don't understand how trashing the planet helps keep our taxes low.

Don't hate us kids, they say, we want you to think we're trying really hard. Didn't you see us waste that $2 Billion on Carbon Capture and Storage? It might even work someday.

Leave the carbon in the ground. It's already sequestered for free.

Don't be manipulated by the government. Think for yourself. They want to trick you on dirty energy so you won't make your parents vote for somebody else. Somebody who actually cares about your future.

The government's scared of you because you have more power than you realize. You can teach your parents about dirty energy and get them involved. Even though you can't vote, you can change the world. You'd better, you're going to be living here for a long time.

Big energy companies want to convince you that fossil fuels are ok. As long as you stay fooled, they keep making money. Fossil fuels are not ok, but they're everywhere, and we need to stop them. Your future depends on it.

Unless we stop this fossil fuel juggernaut, your generation is going to preside over the biggest loss of biodiversity and ecosystem crash in recorded history, and there won't be anything you can do about it. It looks ok now, but by the time it looks bad it will be too late to fix it. So we have to fix it now.

Bonus: A serious plan to fix the problem would bring lots of money into Alberta too. And no, the problem isn't communications.