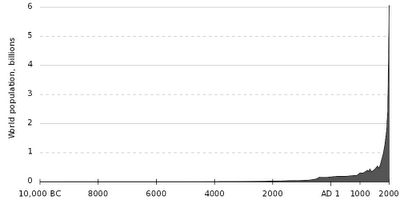 Population_curve.svg from Wikimedia Commons
And you're lucky it cuts off at 2000, we're almost at 7 Billion.

This is part four of five in the HIPPO series. The second P: Population - specifically human overpopulation.

Just by existing, you're already part of the problem. There are over 6.8 Billion people on earth, and right now, the number's only going up. Fun fun fun.

Most of the growth is relatively recent. 6.8 Billion is almost 14 times as many people as the 500 Million people who existed in 1500.

There are no easy solutions. These huge population numbers amplify the habitat destruction, invasive species, pollution and overharvesting that blight the ecosystem. If we plan to live within global carrying capacity, we need to get the numbers down.

Having an exponentially increasing population in a finite system is a recipe for disaster. Winemaker's yeast consumes the sugar in the grape juice, multiplies rampantly for about a week or so, then dies off in a puddle of its own alcohol.

The analogy isn't perfect, the planet has an outside source of energy, the sun, that it can use to repair itself. All the same, we had better be smarter than the yeast if we want to stick around here, rather than being an evolutionary flash in the pan.

Too many people. The more mouths there are to feed, the more we have to continue changing natural biomass into human biomass. We are literally converting the natural world into human beings.

All that biomass has to come from somewhere, and to get it, we're taking from nature at an unprecedented rate. Through the vast majority of human history, human populations haven't been able to use it all. We didn't need to be smart enough to control our own population. Nature did it for us.

We depend on the earth completely. We live well beyond what it can regenerate by raiding the aquifers and the fossil fuels to temporarily increase the food supply.

It's going to end. It's going to be ugly, and there are no easy answers. If we don't choose to control the runaway population growth then nature is going to do it for us, and Mother Nature won't be very forgiving.

As Gwynne Dyer said in Climate Wars, people always raid before they starve. We're on the verge of having billions of hungry, desperate people with nothing to lose. That's a dangerous recipe.

It would be better to figure out how to live within our means, and start recognizing that that means living in a world where the population is going down. If we don't restrain ourselves, mother nature will remind us who's boss, cancel our ecological credit cards, and take the T-bird away.

A future with a future. - Build the social infrastructure for the future