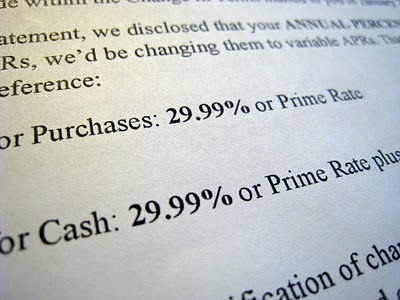 Banks invent money from your promise to pay them back, then charge you interest on the loan.

If you owe money to the bank, for example with a mortgage, a line of credit or even a credit card, you're renting money and paying interest.

It seems innocuous at first. The bank could have done something else with the money and should be compensated for lending it to you. Let's look closer.

Money exists because of promises to pay back the loan with interest. When you generalize that to lots of people, it leads to government deficits and bailouts.

It's mathematically impossible to cover all the interest on all the loans, so some loans will eventually end up in default. Watch "Money as Debt" for more information on how banks invent money, and the consequences.

In order to pay off their loans, individuals work harder, make more goods and services and ultimately take resources from the planet at an ever increasing rate.

The media has become enamoured with growth being good. Economic growth devours natural resources and postpones the inevitable economic crash, but we can't grow forever. Not in a finite world. We need intact living systems more than we need the economy.

Shifting to a steady state economy, without interest charges, would buy us time to figure out how to endure as a species.

Enduring involves living in harmony with, rather than at odds with nature. It will involve an uncomfortable descent from the currently voracious use of energy. It will mean living within our economic and biological means.

It's the financial equivalent of having to eat your veggies after growing up on halloween candy. It's not quite as fun or as tasty, but it's better than being sick.