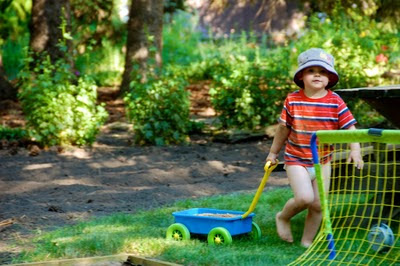 Should this kid pay your debts?

The future is going to have enough of its own problems, so offloading our not-quite-balanced budgets onto the backs of the future is terribly immature.

Everybody wants more than they can afford. As you'd expect in a free market environment, an industry has jumped up to sell us the money we don't have, in exchange for our futures.

Governments are no different. Running a deficit has been sold to us as a perfectly reasonable approach to give us things we want, but can't afford.

People talk about cutting the deficit like it's some sort of virtue. If your friends in government overspend by $10 million last year and only $8 million this year, they're still in the hole $18 million (plus interest) and no closer to getting out.

But they cut the deficit, and we hail them as heroes for doing so. All they've done is stolen slightly less from the future. You're still not on a road to recovery. More like going from ten packs of smokes a day down to eight.

Economist John Maynard Keynes always comes up in these discussions. People use his name like a secret password that lets them spend as much public money as they want. During the good times, when countercyclical fiscal policy would suggest saving money we forget about him.

Deficit spending leads to one of two places, austerity or bankruptcy. Either we struggle mightily to pay it back, or we let the system kerplode. Neither of those options is very attractive.

Running a deficit is like coating your arteries with plaque. A little here and there doesn't seem to cause much of a problem. As you add up the debt though, the interest robs you of your purchasing power, so you need to run a deficit again, coating your arteries with more plaque. The cycle continues, and unless you cut way back on your spending to pay off the accumulated debt the system breaks down and you have a heart attack.

Greece has reached a critical point in this, with its austerity measures that their citizens are revolting against. Nobody likes being forced into austerity. We would like to remain in the style to which we have become accustomed.

The easiest way to do this is to stay out of debt in the first place, and if you find yourself in debt, pay it off as fast as you can. That goes whether you're a private citizen on a level of government.

The future will have enough problems of its own. Don't dump yours on it too.

Fee & Dividend: Make money while saving the planet (This is way better than cap and trade)

(Then again, you might not, but they'll sure make you think.)