18? Step into your power 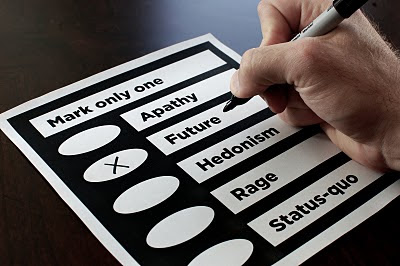 Imagine you've just turned 18. If your first thought was "let's go to the bar" you're probably not alone.

But this is isn't about being able to go drink. We're way beyond that now. You get some of the responsibility for this experiment called civilization.

No more training wheels. The world is going to be what you make it. It's up to you to stick up for yourself and your generation.

Governments are tempted to push problems into the future rather than dealing with them now. In case you haven't been told, well, you're an adult now: There are lots of problems.

The big problems involve living beyond our means. Financially, and ecologically, we borrow from the future to get some sort of benefit right now. We're sorry. We mean well. It's the system. You'll get to use the [expensive_amenity] too. There are lots of excuses.

The people who are making these choices/excuses are older than you, and care less about the future than you do. They see it in the distance. You'll have to live there.

Like it or not, you're going to be responsible for cleaning up their mess, or facing the consequences if you don't.

Your best shot at the future starts now.

Municipal governments in Alberta will be elected October 18. Pay attention to the issues. Elect people who represent you. Otherwise people who don't care so much will end up deciding your future.

Politicians know that young adults typically don't vote. That's why they don't often address the long term issues that will affect you most of all.

You've had your adolescent rebellion. Now put that aside. Claim your adulthood. Care. Vote.

But there's so much more. Step into your power. They won't see you coming. They don't even understand what's about to overwhelm them.

You represent the most connected generation in the history of the world. You could coordinate a thousand people without getting out from under the covers.

Imagine what you could do if you really put your mind, your thumbs, and your energy into it.

Those problems? They're getting worse. The status quo isn't a solution. Nobody has more to gain from a sustainable future than you do. What's more, you have the tools, the connectivity and the self-interest to take a stand and make a difference.

Vote, but don't dare stop there. The future you save may be your own.