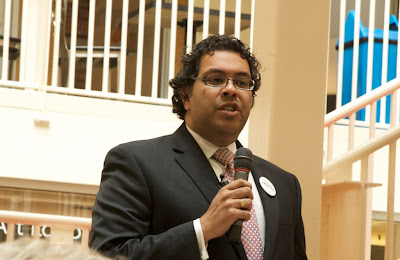 IMG_1104 - Version 2, originally uploaded by Naheed Nenshi is Mayor for The City of Cal.


The world starts out black and white and moves into shades of grey.
It used to be so simple. Five plus eight was thirteen. The capital of Canada is Ottawa. The area of a circle is Pi r squared. Black or white. On or off. Yes or no.
There was a time when you could be right. It was childlike, but it was clear. This also explains how teenagers can know so much more than their parents.
If you're right, there may be a few who will naturally recognize how good your ideas are. But to make a difference in the world, being right isn't enough.
Once you've got a good idea, you need attention. In a crowded media landscape, people are already so overwhelmed with content that they won't even notice your message unless there's something in it for them. They're paying with the scarce resources of time and attention, so give them value in return.
Once you have their attention, you need to be persuasive. Messages need to resonate with to your audience and communicate your idea in ways that address their issues. Even if you're persuasive about issues that don't matter to them, you're unlikely to get to the next stage: Action.
Harnessing the power of other people's imagination is a great way to move things forward.
It's hard to make a difference alone, so getting other people to take action based on your idea is the only way it will be relevant.
Imagine a parent recognizes a dangerous intersection. Even if she's right, if she can't get people's attention, or persuade them to take action then the intersection will remain dangerous. It may take something tragic to get people's attention, but by then it's too late.
For a great positive example, look to Calgary's new mayor Naheed Nenshi. He was admittedly polling "within spitting distance of zero" when he started the campaign. With his vision and his campaign team he was able to command attention and inspire Calgarians with better ideas for Calgary. These ideas resonated with people, who acted with their votes to elect him, despite long odds.
Changing the world takes a lot more than just being right.
You might also like:
18? Step into your power
Local Government? Why on earth would you want that job?
Your City Needs You.
Posted by Unknown at 7:46 AM