What's mined is yours: protect your ecosystems 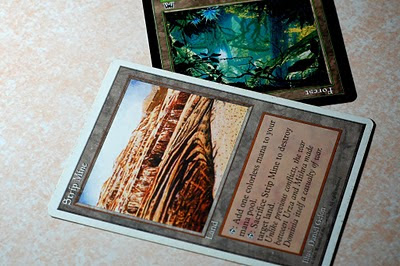 Strip Mine: Tap, Sacrifice Strip Mine to destroy target land.

There's no getting around the fact that Canada is a resource-rich country. This land is our land. Valuing an intact ecosystem is a complex exercise. The benefits of keeping the system intact are small but enduring for everyone. On the other hand, strip mining the land involves a big short-term payday for the the mining company. Simple. Short-sighted.

That short-term payday is accompanied by what economists call externalities. Those externalities take the form of environmental degradation and disruption to the intact ecosystems. But the mining company won't be around for the devastation.

Surprisingly, we are getting better at these decisions. As intact ecosystems become rare, we start recognizing their intrinsic value. They have more triple-bottom-line value intact than if we destroy them.

For example, on November 2 the Federal Government announced that it would not approve the $3 Billion Prosperity Gold-Copper Mine proposed by Taseko Mines Ltd. due to significant adverse environmental effects. The tailings from the mine would have destroyed Teztan Biny (Fish Lake), Y'anah Biny (Little Fish Lake) and portions of Teztan Yeqox (Fish Creek). The mine would also have trampled on First Nations interests in the area. The BC Government had already approved the project, but it also required federal approval.

As another example, an application by a potato farming company to buy 65 square km (100 quarter sections) of native grassland near Bow Island in Alberta was withdrawn. The Alberta Wilderness Association pointed out that the area provides habitat for several species at risk.

In both of these cases, significant public outcries were made and may have swayed the outcome. Frankly, it's too bad these outcries seem to be necessary. We elect people to make decisions on our behalf, then we need to scrutinize them constantly for fear that they'll cave to special interests or return political favours.

However, in the same news release as the Prosperity Mine announcement, they approved the Mount Milligan Gold-Copper Mine, including the 52 million tonnes of potentially acid generating waste rock and tailings. Political cover? Of course, and from both sides. The Nak'azdli First Nation is concerned about the long term environmental damage and don't feel like they've been adequately consulted.

The more you have the harder you have to work to maintain it. In surplus, no-one thinks of shortage.

Avatar, and our relationship with nature