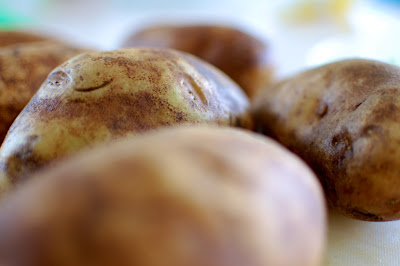 On Halloween 2011, the world reached 7 Billion people. That's a lot of goblins. Forget trying to identifying the lucky kid (most likely Indian, where there's 50 births per minute), instead it's time to reflect on how we got here and our prospects for the future.
Over our ten thousand year history since humanity began agriculture, our population grew slowly and smoothly up until about 1800.
Human population has exploded over the last 200 years. We hit 1 Billion people in 1804, and 7 Billion last week. Our population has doubled since Expo 67 in Montreal. Put another way, we've added more people than existed on earth in 1927 (2 Billion) since Expo 86 in Vancouver.
That's a lot of hungry people. Except that for the most part, they're not hungry. There's food for them. In any ecological niche, population expands in lockstep with food supply. More food means more people, less food - if that were to happen - would mean fewer people.
In 1800 we were already closing in on the human carrying capacity for the planet. Carrying capacity is the population that an environment can support in perpetuity.
We're way above the number of people (estimated at 1-2 Billion) who can live on earth in prosperity permanently. How's that possible? By temporarily exceeding our carrying capacity through the use of non-renewable resources.
Since the industrial revolution, we've introduced coal, oil and gas to mechanize agriculture and provide fossil-fuel based fertilizers and pesticides to increase food production.
This wildly increased food production allows us to temporarily exceed the planet's carrying capacity, as long as we continue to exploit non-renewable resources to keep our food supply up.
Of course this can't continue forever. To avoid catastrophic population crashes, we need to re-learn how to make food without non-renewable inputs. The local gardeners and permaculturists are on the right track. Growing food in an urban or suburban setting is a way of insulating yourself from potential food shortages.
Peak oil will cause transportation problems to be sure, but the problems that really hit you where you live will be due to food scarcity.
Even if all your neighbours think lawns are pretty, their new best friend is going to be the one with the garden when food supply starts to be an issue. It's better to figure out food production while the grocery store is still a great backup than having to grow food while you're hungry.
Originally published November 4, 2011.
You might also like:
Manicured Lawn? You can do better.
Free Health Food at the edge of your culinary comfort zone.
What Cuba can teach us about farming.