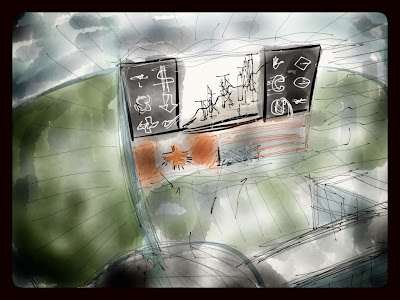 Seven score and ten years ago Lincoln gave a speech in Pennsylvania. On its sesquicentennial we still remember that 'score' means twenty. Thanks Abe.
The Gettysburg Address was also about continuing the struggle of Civil War soldiers by ensuring "that government of the people, by the people, for the people shall not perish from the earth."
If, as Joseph de Maistre opined in 1811, "Every nation gets the government it deserves" where does that leave us?
Rob Ford's 'popularity' aside, his discount government message is as seductive as any dollar store. Discount government comes without vision.
These days, the profit's in oil, thanks to low royalty rates and externalities like climate change, but mostly the oil.
When elected officials like Harper and Redford lobby Washington about a private pipeline it sparks questions about who really runs this petro-state.
Corporations allow for specialization of labour in the pursuit of a common goal, and create things individuals can't. There's no way you could develop and manufacture a smartphone for less than the $919 the 64GB iPhone 5s costs.
However, if corporations set the rules, they would favour their industry, squash disruptive innovations and maintain their profitable status quo.


Representatives of the people are elected to communicate your interests to the government. Decisions are made by the people selected that direct the course of the nation. Hopefully these people have taken to heart that they must act for the people. The corporations will get by.