You can't communicate. That's ok. Nobody can. 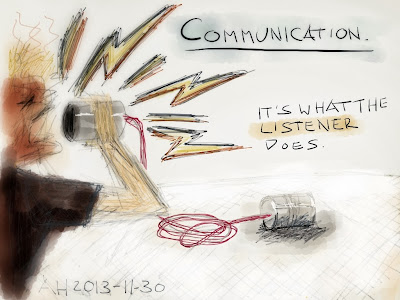 How do you put an idea in someone else's head?
You don't. They have to do it themselves.
If they let your idea into their mental living room, be polite. Don't light the carpet on fire. You won't be invited back.
See these squiggles? They're not even information until you interpret them. Lucky for you, it's in English, not Mandarin. We have a common framework. We agree on how English works. It makes written communication possible.
Suppose you have an idea. You understand it completely. Others don't have your idea yet. You can guide them toward it, but they have to think it themselves.
They haven't had your life, and they might not have the  intellectual or cultural framework you've based your idea on.
Without common language, you could interpret body language and tone, but not details. To your lizard brain threat detector, body language and tone count for a lot.
Saying something doesn't mean it's been communicated. That part depends on the listener. If they can explain it back, then maybe they got it.
Communication is about making it easy for others to think your idea. Being a good listener means letting strange ideas into your mental living room and allowing them to interact with the residents there.


Funny thing about ideas: most people like their own better than they like yours. Socrates taught by asking questions. Did the student get the idea?
Posted by Unknown at 8:00 AM

Email ThisBlogThis!Share to TwitterShare to FacebookShare to Pinterest
Labels: #communication